Inspired by books of science adventure that she read while visiting her grand parents, young Marie Daly dreamed of becoming a scientist early in life. Having the support of her family, including her father who attended Cornell University and majored in Chemistry, she attended an all-girls secondary school in Queens, NY where she grew up. In 1947, Mary became the very first Afro-American woman to earn a Ph.D. in Chemistry in the United States. Dr. Daly’s most significant work is examining the biochemistry of cholesterol and heart health. She discovered the link between the cholesterol and clogged arteries. She also studied the effect of sugar on arteries and the effect of cigarette smoke in lungs. In addition to her research Daly was committed to developing programs to increase the enrollment of minority students in medical school and graduate science programs. In 1988 she established a scholarship fund for African American science students at Queens College in honor of her father. 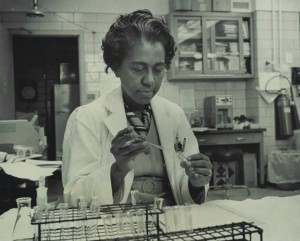