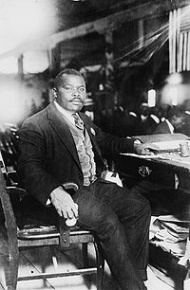 Marcus Mosiah Garvey, Jr. was born in St. Ann’s Bay, Jamaica on August 17, 1887. In 1910, he began traveling throughout Central America, the Caribbean and Europe. In his travels, he saw that Black people of the time owned nothing, regardless of where he went in the world, and were not united. He was determined to do something about it. Founded in 1914, the UNIA grew in just five years to include to include over six million followers. He built newspapers, schools, churches, a shipping company, printing operations, food and clothing stores. The purpose of the organization was « to unite all people of African ancestry of the world to one great body to establish a country and absolute government of their own ».
Garvey moved to Harlem in 1916. He started speaking on street corners at night and lecturing at various halls and churches, spreading his powerful message of unity, social freedom, political freedom and economic freedom for Black people. Garvey had an amazing ability to communicate his ideas in a way that Black people could « feel » and relate to. In May of 1916, Garvey began a historic 38-state tour and took the United States by storm.
In May of 1917, Garvey started the New York Division of the U.N.I.A. with 13 members. By 1926, the membership of the U.N.I.A. had grown to over 6 million members. Marcus Garvey built the largest Black organization in history. Marcus Garvey’s built huge businesses, encouraged entrepreneurship, and got millions of people buying from Black-owned business. He taught us all to be proud of our race and to unite as a people. In his own words, he taught us all to « Be Black, Buy Black, Think Black, and all else will take care of itself! ».  In 1919, he launched the Black Star Shipping Lines. His program was one of Black self-determination and independence and set the theme for all Black development today. Convinced that blacks should have a permanent homeland in Africa, Garvey sought to develop Liberia. The Liberia program, launched in 1920, was intended to build colleges, universities, industrial plants, and railroads as part of an industrial base from which to operate. However, it was abandoned in the mid-1920s after much opposition from European powers with interests in Liberia. In 1928, Garvey travelled to Geneva to present the Petition of the Negro Race. This petition outlined the worldwide abuse of Africans to the League of Nations. In September 1929, he founded the People’s Political Party (PPP), Jamaica’s first modern political party, which focused on workers’ rights, education, and aid to the poor. Also in 1929, Garvey was elected councilor for the Allman Town Division of the Kingston and St. On 10 June 1940, Garvey died after two strokes. The impact of Marcus Garvey has been huge. Schools, colleges, highways, and buildings in Africa, Europe, the Caribbean, and the United States have been named in his honor. The UNIA red, black, and green flag has been adopted as the Black Liberation Flag. Since 1980, Garvey’s bust has been housed in the Organization of American States’ Hall of Heroes in Washington, D.C. Malcolm X’s parents, Earl and Louise Little, met at a UNIA convention in Montreal. Earl was the president of the UNIA division in Omaha, Nebraska and sold the Negro World newspaper, for which Louise covered UNIA activities. Kwame Nkrumah named the national shipping line of Ghana the Black Star Line in honor of Garvey and the UNIA. Nkrumah also named the national soccer team the Black Stars as well. The black star at the center of Ghana’s flag is also inspired by the Black Star. During a trip to Jamaica, Martin Luther King and his wife Coretta Scott King visited the shrine of Marcus Garvey on 20 June 1965 and laid a wreath. In a speech he told the audience that Garvey « was the first man of color to lead and develop a mass movement. He was the first man on a mass scale and level to give millions of Negroes a sense of dignity and destiny. And make the Negro feel he was somebody. »
Dr. King was a posthumous recipient of the first Marcus Garvey Prize for Human Rights on 10 December 1968 issued by the Jamaican Government and presented to King’s widow. In 2002, scholar Molefi Kete Asante listed Marcus Garvey on his list of 100 Greatest African Americans.  In 1969, the parliament of Jamaica proclaimed Marcus Garvey as the country’s first national hero.