Annie Minerva Tumbo Malone was born in Metropolis, Illinois She was the tenth of 11 children of Robert Turnbo, a poor farmer, and Isabella Cook Turnbo. Her parents died when she was young. From her humble beginnings as an orphan raised by her sister, Annie Malone became one of America’s first self-made Millionaire. As a young girl, Malone enjoyed fashioning her own and her sisters’ hair. She became aware of differences in hair texture and sought a way to straighten hair. She began developing safer and more effective hair care methods and treatments for women of color in the 1890’s. By the turn of the century, she had developed a network of “Poro Agents” who went door-to-door marketing hair care and beauty supplies she had created. In 1917, Annie Malone founded the first Poro College in St. Louis, Missouri. By the 1920’s she had built a financial empire valued at over $15 million dollars. This included dozens of Poro Colleges where she empowered people with personal development and training in the business of black cosmetology, manufacturing, and public etiquette. At her zenith, she had established over 100 beauty salons & supply stores nationwide, built manufacturing and distribution centers, and employed more than 10,000 door-to-door agents world wide. Annie taught Madame C.J Walker and thousands more at Poro Colleges around the country. Madame C.J. Walker was one of those “Poro agents” who went on to build on Ms. Annie’s shoulders. A beauty industry pioneer, Annie Malone, the social activist and philanthropist, donated vast amounts of wealth to social and educational institutions. Among the most noted was her $25,000.00 donation to Howard University. At that time, it was the largest gift ever donated to a historically black institution. However, historians credit Malone with having developed her products and distribution system first. Walker sold her own “Wonderful Hair Straightener,”. As a result, Malone trademarked Poro, a new name for her product and merchandising systems in 1906. (Poro is a West African word for an organization dedicated to disciplining and enhancing the body spiritually and physically.) Never forgetting her past, in 1922 Annie Malone made her first $10,000.00 contribution to the St. Louis Colored Orphans’ Home, where she served as president from 1919 to 1943. In 1946, it was renamed the Annie Malone Children’s Home in honor of her. Annie Turnbo Malone died of a stroke on May 10, 1957, in Chicago, Illinois. She was 87. By the time of her death, Malone had lost her national visibility and most of her money. Having no children, her estate, valued at $100,000, was left to her nieces and nephews. 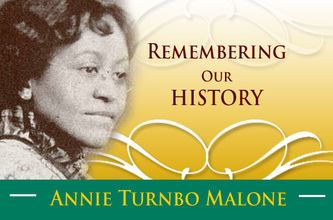