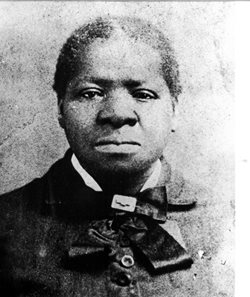 Bridget « Biddy » Mason (1818 – 1891)
Biddy Mason, born into slavery, walked two thousand miles to get to California. She won her freedom in a Los Angeles courtroom in 1856 even though the law did not allow people of color to speak in open court. A skilled nurse and midwife, she saved her money and helped anyone who was in need. Ten years after gaining her freedom, she bought a site on Spring Street for $250. She instructed her children never to abandon this site. Mason was one of the first black women to own land in Los Angeles. In 1884, she sold a parcel of the land for $1500 and built a commercial building with spaces for rental on the remaining land. She continued making wise decisions in her business and real estate transactions and her financial fortunes continued to increase until she accumulated a fortune of almost $300,000. Her grandson, Robert Curry Owens, a real estate developer and politician, was the richest African-American in Los Angeles at one time.
Biddy Mason also gave generously to various charities and provided food and shelter for the poor of all races. Lines of needy people were often forming at 331 South Spring Street. She also remembered the jail inmates whom she visited often. In 1872 she and her son-in-law, Charles Owens, founded and financed the Los Angeles branch of the First African Methodist Episcopal church, L.A.’s first black church. And because the public school was not open to blacks, she provided the money to start the city’s first school for African-Americans.