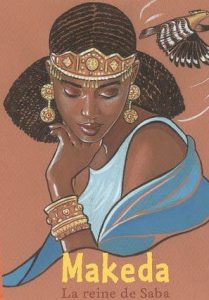 Makeda is best known as the beautiful, wealthy, and intellectual queen who tested Solomon with riddles, is a somewhat mysterious figure in ancient texts, and little has been verified about her life. Even basic details such as her given name and the exact location of her kingdom remain uncertain. Nevertheless, she has fascinated and inspired African American, Ethiopian, Islamic, and Jewish cultures for nearly three thousand years. She was a monarch of the ancient kingdom of Sheba and is referred to in Habeshan history, the Hebrew Bible, the New Testament, and the Qur’an. Sheba was an ancient name for Abyssinia, a kingdom on the Red Sea in the vicinity of modern Ethiopia and Yemen. African women of antiquity were legendary for their beauty, power and lover affairs. Especially great were the Queens of Ethiopia; Queen of Sheba (960 B.C.), Candace of Meroe and her defeat of Alexander the Great (332 B.C.), Amanirenas, Amanishakhete, Nawidemak, Amanitore (Acts 8:26-40), Shanakdakh, and Malegereabar. In Ancient times Ethiopia was also known as Nubia, Kush, Aksum, Abyssinia and Sheba. One thousand years before Christ, Ethiopia was ruled by a line of virgin queens. The one whose story has survived into our time was known as Makeda, “the Queen of Sheba.” Her remarkable tradition was recorded in the Kebra Nagast, or the Book of the Glory of the Kings [of Ethiopia], has been held in the highest esteem and honour throughout the length and breadth of Abyssinia for a thousand years at least, and even to-day it is believed by every educated man in that country to contain the true history of the origin of the Solomonic line of kings in Ethiopia. At this time, Ethiopia was second only to Egypt in power and fame. Hence, King Solomon was enthralled by Ethiopia’s beautiful people, rich history, deep spiritual tradition and wealth. He was especially interested in engaging in commerce with one of Queen Makeda’s subjects, an important merchant by the name of Tamrin. She gave the king 120 talents of gold, and of spices very great store and precious stones; there came no more abundance of spices as these which the Queen of Sheba gave to King Solomon.” But Makeda’s gifts to Solomon extended beyond material objects; she also gave him a son, Menelik. The boy’s remarkable resemblance to his grandfather prompted Solomon to re-christen Menelik. Solomon later re-named his son after his own father, the legendary King David