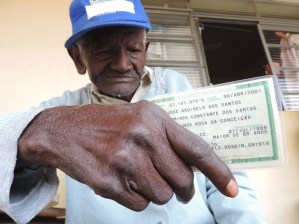 Jose Aguinelo dos Santos was born on July 7 1888, just two months after slavery was abolished in Brazil, the last country in the Western Hemisphere to outlaw the trade. His parents were African slaves. Jose never married or had children,but he still walks without a stick, eats four meals a day and has no health problems – despite smoking a packet of cigarettes a day for the last 50 years. Jose known simply as Ze – was apparently 26 when the First World War broke out, and already a pensioner at 65 when Queen Elizabeth II ascended to the British throne. If the birth certificate is genuine, he would have been 52 when Brazil football legend Pele was born – and 62 when Brazil first hosted the World Cup, in 1950. He turned 126 this years.