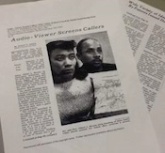 Marie Van Brittan Brown was born in 1922 in Jamaica, Queens, New York City. She was an African-American nurse and inventor.
In 1966 she had the idea for a home surveillance device. She applied for a patent along with her husband Albert Brown in 1966 for a closed circuit television security system. They created a system for a motorized camera to show images on a monitor. The patent, #3,482,037 was granted. Her devise was the forerunner to the modern home security system. Brown’s system had a set of four peepholes and a camera that could slide up and down to look out each one. Anything the camera picked up would appear on a monitor. An additional feature of Brown’s invention was that a person also could unlock a door with a remote control. Marie Brown told The New York Times the couple invented the device because police were slow in responding to emergencies in their neighborhood. There had been an uptick in crime, and Marie Brown wanted to feel safer while at home alone. The Times reported the “audio-video alarm system” could be used to see who was at the door and interview them as well. She was given an Award for the National Scientists Committee (NSC).
Marie Van Brittan Brown died February 2, 1999.